Vance+Hines Classic II's and other Exhausts:

I installed the Cobra Slip-ons right after I got the bike and then found out about the V+H Classic II's.  According to most on the Shadow Rider Forum this is the best exhaust by far.  I agree.  The Cobra's look better, I think, but the sound is a little "brash" versus the deeper rumble from the V+H's.  All this is, of course, personal choice.  Many like the Jardine Rumblers and there are some others as well.  I included some pictures here of an item I have really ignored for too long.  I had about 9,000 miles on the V+H's  before I looked into repacking the baffles.  As you can see from the photos, I should have done it earlier!  The sound was starting to get louder and it did not have that deep rumble.  Repacking is really a no-brainer.  There are two allen bolts at the end of the exhaust to remove.  Slide a couple of fingers inside the baffles and pull and twist and they come right out.  I got some repacking material at the local dirt bike shop for about $6.00 per pack.  I started with one wrap and found it was pretty loose so I added the second and it was good and tight.  Put the same on the the other pipe and starter 'er up.  Sounds much better now.  Got that deep rumble back that's characteristic of the V+H's.

Cobra Slip-ons.  The picture on my home page has the V+H's.

This is the rear baffle.  I can't tell whether the front half burned off or whether the packing all got pushed to the back during installation.  If the latter is the case, then I was probably right in adding the second layer (see below) since it would have been packed pretty solid originally.  Same situation with the other pipe.

This is the first wrap. I used masking tape to hold it in place.

View inside the exhaust pipe where you have to mate up the baffle.

Since last year, I have had a little more experience with the exhausts.  After reading all the posts on the Shadow Riders Forum about the "Holey Order of the 2-1/8", I just had to try it.  I got the hole saw from Home Depot (make sure you get the one for metal and not wood) and went to it.  Took about 5 minutes to drill out the back plate and pull the little baffle.  Took it out for a ride, but, sorry, I just didn't like it.  Sounded too tame and "putt-putty" to me but if it works for you, go for it.   I just like the louder, rumble sound better.  To me, all the holesaw did was amplify the stock sound which was not what I was looking for.  Anyway, a lot of people like the mod so if you're looking for some volume but not something like the more aggressive pipes, this is for you. 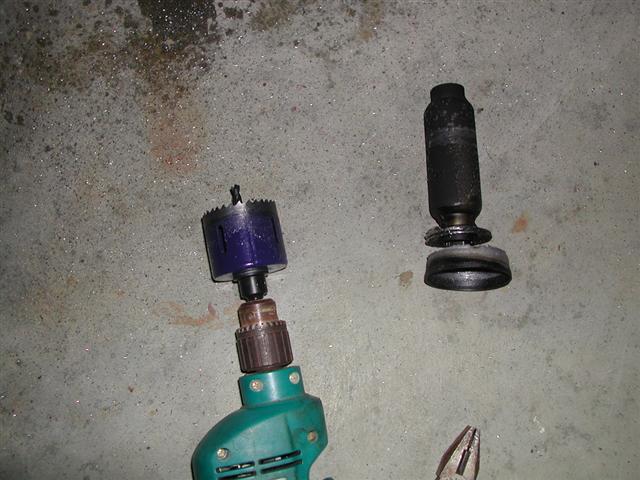 The holesaw and baffle after removal. 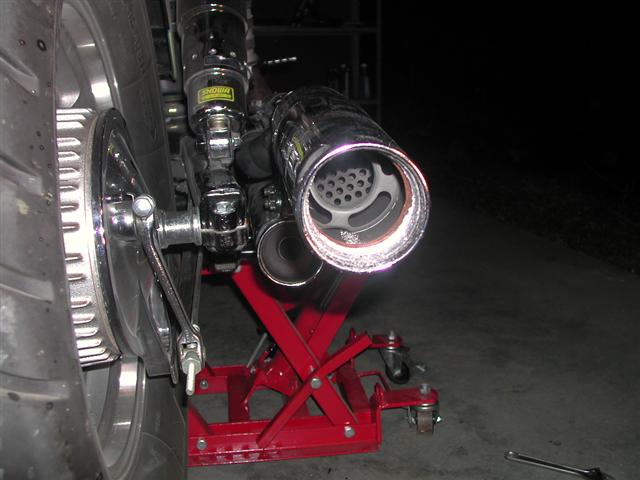 I also picked up another system cheaply from Dennis Kirk and tried it.  It was called a Rebel exhaust system and they are now out of circulation but I think were either made by or bought by Samson since their heat shields fit the Rebels perfectly.  The system looks good and the fit is good but the quality is not that great.  The pipes turned gold almost immediately and the heat shields are also turning gold at the elbows near the cylinders.  The sound is definitely louder than the V+H's and little more brash, almost like the Cobra's.  Personally, I prefer the sound of the V+H's which have a deeper rumble to them. 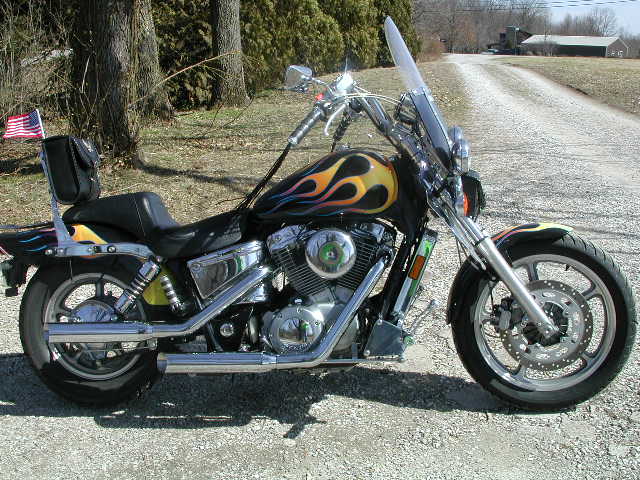 After riding the with Rebel's for a while I decided to go back to the V+H's but before I did this, I wanted to repack the baffles again.  It's been about 6,000 miles since the last repack with the cheap dirt bike shop packing.  I picked up a couple of packs of packing from Dennis Kirk which were listed for the V+H Cruizer exhausts.  They have two types, a normal and a "quiet" type.  I picked the normal one.  The difference in material is immediately evident.  The stuff from DK was a lot thicker and looked like it would last longer.  Also, the cheap stuff was almost burnt thru when I took it off.   I repacked the pipes and put them back on the sound is sooo much better than anything else.  I think I'm done experimenting now.  At least with the exhaust system....LOL. 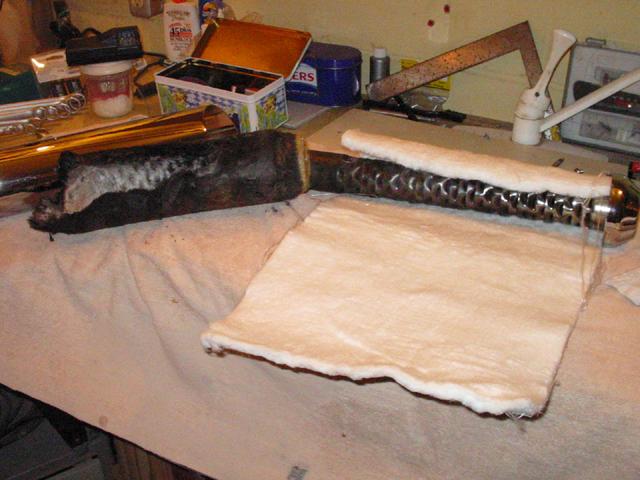 The new packing material from DK and the old, burnt out stuff on the left.  You'll need to get two packs since one is good only for one pipe.  Cost for two with shipping is about $22.

Back to Home Page